Whilst there is clear evidence of Bronze Age and Roman occupation and industry, (through the discovery of numerous items and the presence of ancient paths and roads), documentary evidence begins with the Domesday records of 1086, which listed 3 Saxon manors. The parish boundaries at that time enclosed an area of about 3,000 acres.

Until the advent of the cloth trade (in the middle of the 14th century) the area would largely have been given over to subsistence farming, raising livestock such as cattle, geese, pigs, and chickens, and growing some cereal crops.

The Peasants Revolt in 1381 and its local connections accelerated the changeover of land usage to the growing of wool, hemp and flax. This gave rise to lots of associated jobs (weaving, dying, spinning), spawning a whole cottage industry and bringing hitherto unknown wealth to the locals. The village was ideally situated between the 2 larger towns of Sudbury and Lavenham to capitalise on the boom in trade. This continued until about the middle of the 16th century, when people began buying wool from elsewhere to weave into their materials.

Records from 1522 show that 12 local people were engaged in the cloth trade. This compares with 57 in Lavenham, 28 in Melford, 27 in Sudbury and 9 in Little Waldingfield. Unfortunately tax assessments at that time (to raise money for Henry VIII) start to spell the downfall of the good times. Many of the clothmakers were upset at the taxes and determined to move out of the area. Obviously this meant jobs were lost and in 1525 there were riots in Lavenham.

In 1563 John Hopkins became the Rector and teamed up with Thomas Sternhold; together they produced the first metrical version of the Psalms, setting them to modern music. Hopkins died in 1570 and was buried in Great Waldingfield churchyard. Since then the book has run into over 600 editions and is outsold only by The Bible and The Book of Common Prayer.

Around the time of the Reformation, many of the old cottages in the village were rebuilt, adding chimneys where previously there would only have been smoke-holes. In 1559 Queen Elizabeth I tried to slow deforestation by banning the use of timber for building, and the population boom by banning the sharing of homes. This was frequently got around by turning a single cottage into 2 or 3.

The 17th century was not a good one for the village. In 1626 plague descended and numbers fell from 513 (recorded in 1611) to 459 (in 1631). The cloth trade was in serious decline, but some consolation was provided by changing the use of land from raising livestock to arable farming, allowing local people to get jobs with the farmers working the land.

It is thought that in 1648, during the siege of Colchester, Cromwell’s Ironsides were billeted in the area around what is now known as Garrison Lane (perhaps for obvious reasons). Certainly, after the Civil War, groups of soldiers were stationed there for a few weeks before being disbanded. 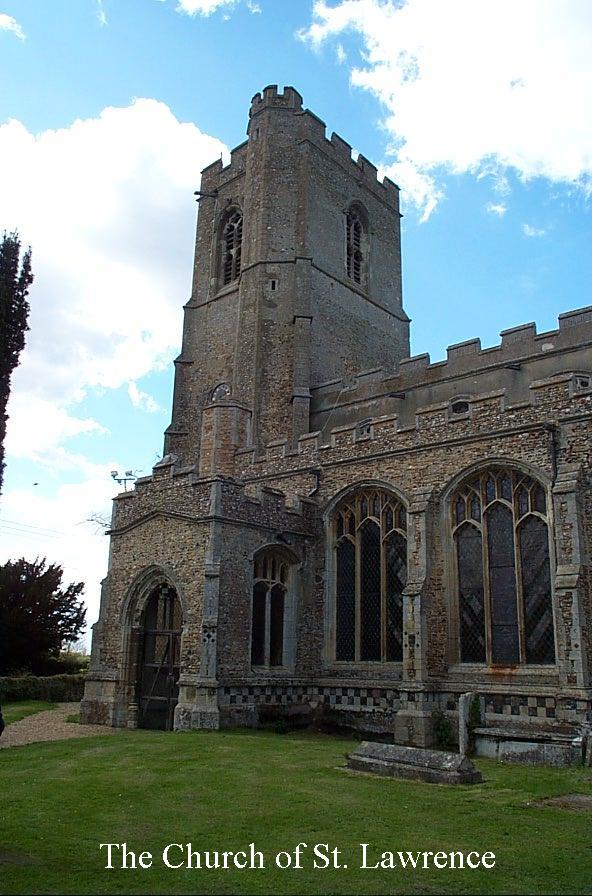 The 1851 Census tells us that the village had a population of 659, with 140 agricultural labourers, 58 scholars, 46 paupers and 20 farmers. By 1901 this has dropped to 462 as a result of many people moving away to seek work following job losses arising from importation of basic goods. The Great War witnessed the permanent loss of another 34 village men, and a flu epidemic – combined with the depression of the

Airfield 174, as it was known, was allocated to the USAAF in 1942, built in 1943 (by John Laing & Son) and officially transferred on 23rd March 1944. there were 3 concrete runways, the main one being 2000yds long and the secondaries 1660 yds and 1400yds. First flying B-24 Liberators and then B-17 Flying Fortresses as they became available, the 486th Bombardment Group (Heavy) – more commonly known as the 486th Bomb Group – made 6173 sorties on 188 missions (including supporting the D-Day landings), dropping14,517 tons of bombs and 4.6 tons of leaflets. 33 aircraft were lost in action and there were 24 other operational losses. The last mission was flown on 21st April 1945, and the airfield was transferred back to the RAF on 10th October 1945.

The Church of St. Lawrence

The church, dedicated to St. Lawrence and Grade 1 listed, dates back to the 14th century, though there was a church on the site for some time before that – since before the Norman conquest in fact. The greatest change probably happened in 1869 after the then rector (W.D. Bailey) visited the Holy Land. In the chancel there is a mosaic of marble fragments from Rome and granite from the Holy Land. The cross is made from alabaster which came from a temple near the Sphinx. More information on the church can be found by following this link.