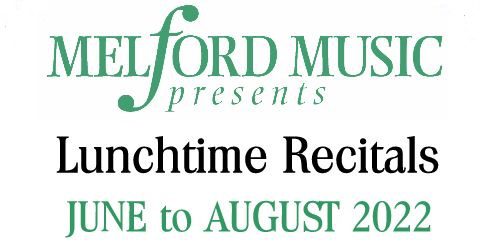 Melford Music hosts lunchtime recitals beginning from the first Wednesday in June, through the summer months until the last Wednesday in August. The recitals start at 1.10pm and usually run for about 40 to 45 minutes and feature a variety of music from Early to Late Classics plus Jazz and Rock.

There is a toilet for the disabled. Public Toilets are available in the Churchyard. The church is fitted with a loop system for the comfort of those who use hearing aids. Normal emergency regulations will apply.

There is a Retiring Collection to help raise money for the preservation of the wonderful church.

East Coast Guitar Trio (1st June)
Martin Plackett, Sam Plackett and Les Simons
Elements of Django Reinhardt’s swinging rhythm, dynamic Spanish guitar and jazz vocabulary inspired by the likes of Pat Martino and Grant Green are blended together in the musical brew that is East Coast Guitar Trio. Sam, Les and Martin have been performing together for over a decade and their arrangements of Latin jazz Standards, American Songbook Tunes and Popular Classics have changed over the years. These wonderful compositions from composers such as; Dizzy Gillespie, stand alone as great melodies, for ECGT, as with most other jazz ensembles, these compositions function as vehicles for improvisation, ECGT will be announcing each tune throughout the performance and request that:- “If you feel inclined to clap, please do so freely whenever the moment takes you.  If you happen to miss the name of a tune or would like to know anymore then catch us after the show”. 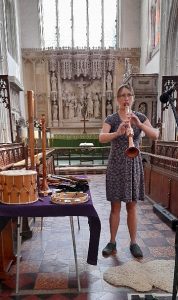 Lizzie Gutteridge took up playing shawm as a part of the historical re-enactment movement to re-form Waits bands throughout the country, then decided to pursue it further and make it her main occupation. She plays a wide range of historical instruments, including bagpipes, recorders, curtals and fiddles. Lizzie now performs up and down the country, in and out of historical costume, including as a member of Blondel and The York Waits. Freelance engagements have included the Globe’s “Nell Gwynn”, both on tour and in the West End, “The Knight of the Burning Pestle” at the Wanamaker Theatre, performances in Morocco and London with Passamezzo, large scale events at Hampton Court and the Tower of London as well as TV appearances on “Thronecast – Gameshow of Thrones” and “A Merry Tudor Christmas with Lucy Worsley” and live & recorded performances on bagpipe of Gregory Rose’s “Dance Macabre”. 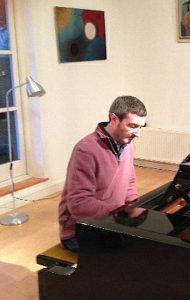 Trevor began playing piano at age 6 and later attended the Royal Academy taught by the well-known Geoffrey Pratley amongst others.  He has been a teacher of the instrument since 1979.

EMMA BISHTON whilst a classically trained singer, Emma enjoys singing a wide range of repertoire and seeks to use her skills and experience to promote singing and it benefits for people of all ages.  She also trained as a music therapist, and worked for 10 years with people with learning disabilities.  She performs regularly both as a soloist and in small groups.  Solo performances have included recital of work by De Falla, Fauré and Boulanger in Lion Walk Church, Colchester; Mozart and Handel German Arias with Lavenham Sinfonia, and numerous concerts with the Suffolk Villages Festival.  As an ensemble singer she performs regularly with the 5-part the Marenzio Singers who specialise in early music and madrigals.  For 25 years she has been part of the specialist contemporary choir The New London Chamber Choir, performing Stockhausen’s opera Donnerstag at the Festival Hall.   Emma is also the musical director of Nayland Choir.

TOM COGAN Tom is an East Anglian and gained a choristership to St John’s Cambridge at the age of eight and started organ lessons with Dr George Guest when he was Head Chorister.  He was a Music Scholar at Lancing and continued his Organ studies with John Alston, himself a pupil of Frank Bridge.  Tom was the first pupil from the refounded Choir School to go back to St John’s as a choral scholar.    After Cambridge, Tom pursued his singing career in London.  He was in the Choir of St Marylebone under the inimitable Michael Howard.  He also sang at Westminster Abbey, St Pauls Cathedral, St Peter-Ad-Vincula in the Tower of London.  His freelance work included singing for the John Alldis Singers and Cantores in Ecclesia.  He appeared in King Roger at Sadlers Wells, Tancredi at Rennes and Orleans and was in the premiere of Taverner’s Therese at the Royal Opera House.   As well as all his musical pursuits he is a member of Gainsborough’s House workshop and does wood engravings for leisure.  Tom retired as Director of Music at Holmwood House School in 2012.  He is organist at St Mary’s Church, Boxford.

Jennifer Cable graduated from Trinity College of Music in Greenwich with a first class degree and then taught music with Herfordshire and Southwark music services. She founded her own recorder ensemble ‘Mean Time’ and alongside solo performances plays with the Longslade Consort, Tutti Flutti and the British Recorder Light Orchestra.  Jennifer currently works as the business manager for Southwark Music Hub.

Stephen Mitchell read music at Exeter University whhere he was the Organ Scholar.  After teaching music in a comprehensive school in Welwyn Garden City he became a priest and served as a Curate at Malvern Priory before becoming Precentor at Leicester Cathedral.  During his ministry he continued to make music teaching A level, conducting a benefice choir and accompanying his two daughters, who also went on to study music.  In retirement Stephen enjoys composing, arranging and accompanying and learning the cello.  He also enjoys writing, his book Past Perfect was published recently. 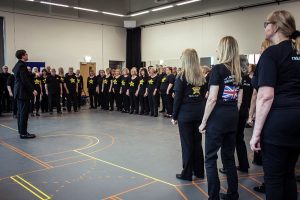 Sudbury Rock Choir have had a busy couple of terms since returning from eighteen months of singing together over zoom during the pandemic.  They are delighted to be back in the room together and performing again, and since the start of the year have raised over £12,000 singing in Chelmsford Cathedral for the homeless charity CHESS, Boxford Church for World Vision’s DEC Ukrainian appeal, and in the Mercury Theatre, Colchester.  The lunchtime concert in Holy Trinity Church is a real highlight of the year for Sudbury Rock Choir, and is one of the choir members’ favourite events.  This year they will be performing more popular hit songs from the 60s through to the current charts, including ‘God Only Knows’, ‘Boogie Wonderland’, ‘Hallelujah’ and ‘I Wanna Dance with Somebody’.

The two Rock Choirs rehearse weekly in Long Melford Football Clubhouse on Mondays at 8.00pm, and the Quay Theatre on Wednesdays at 10.30am, and you can join them or find your nearest Rock Choir group by searching www.rockchoir.com and putting in your post code. 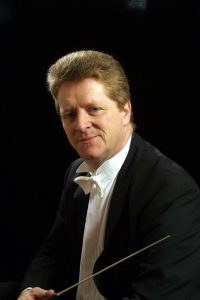 CELEBRATING 30 YEARS OF FINE MUSIC IN A FINE CHURCH

John, born in Shrewsbury, started his musical career, age 6 learning the piano and singing in choirs.  He studied French Horn and conducting at the Royal Academy of Music, before embarking as an orchestral performer, soloist, composer, arranger and conductor, spanning three continents and more than three decades!  He spent 8 years in South Africa as prinicpal and solo horn of the premier SABC National Symphony Orchestra and the National Orchestra, and made his conducting debut there.  On his return to England he was principal horn of the Brighton Philharmonic Orchestra and many other orchestras. He was also Deputy Conductor of the Warwickshire Youth Symphony Orchestra.  John is now a full-time freelance player and Associate Conductor of the newly formed Spires Youth Orchestra.  Being a qualified pilot, John owns his own aircraft and created the annual “Shuttleworth Collection Flying Prom” concerts at Old Warden Aerodrome and has conducted these for over 12 years. 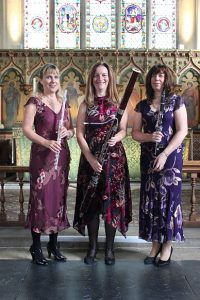 ANNA HOPKINS is a freelance flautist, living near Norwich
Having studied for 4 years at the Royal College of Music, and then studied for 10 years with Jonathon Snowden. She freelanced in the London area as an orchestral musician and soloist as well as playing for shows and musicals. Anna also worked with several chamber groups and performed at various venues including historic houses, churches, Savoy Hotel, BBC Good Food Show (Olympia).
Since moving to Norfolk Anna performs regularly with various chamber ensembles as well as solo recitals, and is often a guest soloist with choral societies. She has performed at venues throughout the country, in recital series, including St Martin-in-the-Fields (London), St Georges (Hanover Square),Southwark Cathedral, King of Hearts (Norwich) St Peter Mancroft (Norwich),Aylsham music, as well as at various music festivals. Anna is co principal with the Norwich Philharmonic Orchestra and principal with the Norfolk Symphony Orchestra.
Anna also teaches flute and is an examiner for Trinity College London, a career that takes her across the country and abroad.

KAREN VERRACHIA
Karen started off like many children do, on the recorder and won her first competition between Norfolk school children at the age of 7. She went on to start learning the clarinet at the age of 9. At 18, Karen joined the Army, having auditioned for a place in the Staff Band of the Women’s Royal Army Corps which at that time, was the only all women’s military band in Europe. Here she stayed for 6 years during which time she had the privilege of spending a year at the Royal Military School of Music, Kneller Hall, and played with some of the finest musicians in the Army, RAF and Marines all over the UK and abroad, including Hong Kong, Cyprus and Germany.
Karen has been principal clarinet of the Norfolk Symphony orchestra for a number of years and has enjoyed broadening her horizon of orchestral music. She has had some great opportunities with them to play solos and ensembles. Her other musical love is playing alto saxophone and clarinet with the Galaxy Big Band, a traditional 40’s style big band based in Newmarket.

SYLVIA NEWTON
Sylvia started playing the bassoon when she was 12 and played in school, then area and county youth orchestras and bands. She went on to do a Music degree in Cambridge where she studied with Ian Cuthill, one of the country’s busiest professional bassoonists. She then trained to be a secondary school Music teacher in London. Sylvia has taught music in secondary education throughout her career but playing the bassoon has always been her first love. As well as being principal bassoon with a large number of symphony orchestras, Sylvia has been a soloist and played bassoon concertos with several orchestras as well as playing in countless chamber groups, musical productions and choral societies. As part of her teaching role, Sylvia has coached many chamber groups and arranged music for many different sized ensembles. She has also done a lot of conducting as part of her teaching role, and has conducted musicals, and a variety of bands and orchestras, and led 10 music tours to various countries in Europe. She is currently principal bassoon with the Norfolk Symphony orchestra 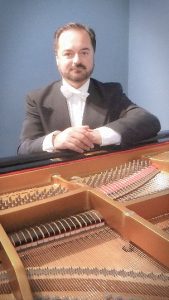 Paulo Lopes was born in Lisbon, Portugal, where he started playing the piano at the age of six. At the age of nine, he was awarded a scholarship to the Gulbenkian Foundation in Lisbon to study music and the arts. He joined the Conservatoire Nacional de Lisboa at the age of twelve where he had piano tuition from Leonor Leitão-Cadete for several years. He then came to London to continue his studies, studying at the Guildhall School of Music with Norman Beedie and with Maria Garzón. In 1997 he became a Licentiate of Trinity College, London, and has given numerous piano recitals, playing extensively in England and the south of France. He has won a variety of piano competitions in regional music festivals and manages “Stoke Music”. 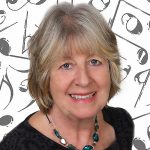 Susi studied at the Guildhall School of Music and Drama where she gained Associateship in both performing and teaching.. She taught piano at the Guildhall and Colchester Institute and was the official accompanist for Sudbury music festival for several years. She has been very interested in using music as a therapy for people with learning disabilities for many years. Susi and Paulo have been working on two piano repertoire for the last two years and are enjoying exploring the wide range of two piano music. 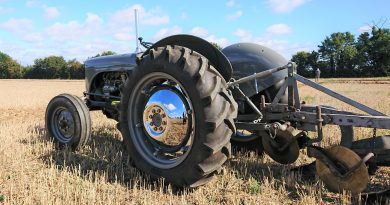 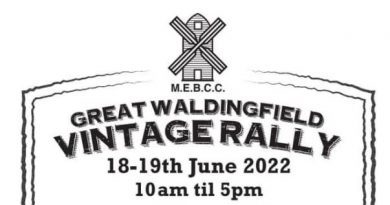 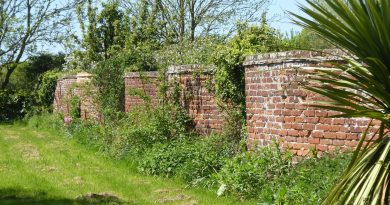