February has been a very busy month for the Neighbourhood Plan and March looks to be the same as we are aiming to have four Focus Groups and visit various established groups in the village by the end of next month.

We have held two focus group discussions this month already – one on Community Facilities asking participants for their views on our current facilities as well as asking for ideas for any facilities that they feel the village needs. Lots of good ideas came out of the group.

The second one was on the Natural Environment and we attended the Branchlines AGM to find those who would be interested in attending. The actual group discussion covered how to protect our important views in the village as well as how to protect and enhance our biodiversity. One of the key issues that came up was the need to find out who owns what in the village.

We are trying to make sure that we are covering both different parts of the village in the Focus Groups as well as different age groups within the village clubs. With this in mind, we will be visiting the Toddler Group as well as the Knit and Natter, the Pop-In and the Bowls Club.

It is especially difficult to access working parents and so I visited the school to talk to the Headteacher about ways to engage the parents at the school. The Headteacher was very supportive and we will be having a table outside the school in March. We will also be visiting again to decide how we can involve the pupils themselves.

In addition we now have a Facebook Page where we are posting all that is happening and has happened as this will act as a timeline for the final Neighbourhood Plan.

We have also produced a leaflet which we have been handing out at the Focus Groups so that the message about the Plan can get out into the village.

A detailed project plan is our single biggest challenge at the moment and we have had a number of working group meetings in order to make this as realistic as possible.

The Neighbourhood Plan is a huge project and very time-consuming and we are always grateful to hear from anyone who is interested in helping! 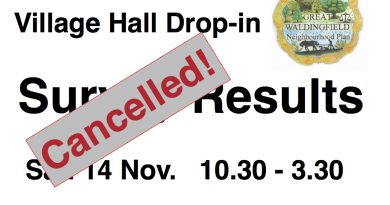 Sorry, no survey results here yet